Boats for sale: International > Narrowboats
View 3435 boats for sale in the United States

Sorry, but the Sailing Yacht by Cornish Crabbers 'Trader' gaff Ketch listing has already been removed.

Get an email notification when another vessel like this is listed

We also have the following similar vessels currently advertised: 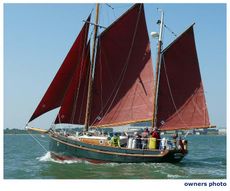 Cornish Crabber Trader 30    £37,500
The 'Cornish Trader' was one of the first larger boats from Cornish Crabbers. It uses the same basic hull as the more common 'Pilot Cutter', but with slightly raised decks and bulwarks, and gaff ketch rig instead of gaff cutter, looks quite different. It also has significantly more interior space, headroom and stowage then the 'Pilot Cutter' versions. This very well looked after example was launched in 1981 and has been in the same ownership since 1991. She is for sale now only as age is catching up with the owners.... read more